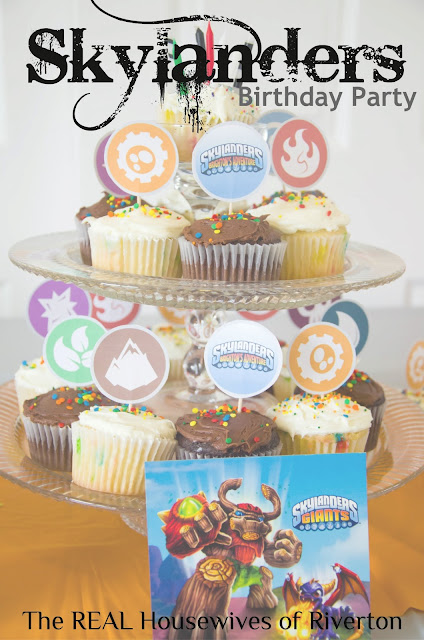 This past week was a roller coaster wasn’t it?  I was feeling a bit bad about the blog being neglected over the past few days and then I got thinking about what all has happened this week.  Here is a quick recap of how my week went:
Monday – Boston Bombing – I couldn’t walk away from the news.
Tuesday – still watching the news and my MOM got into town!! and introduced me to the Jodi Arias murder trial.  She’s been telling me about it for a while but I hadn’t started watching until she got here.
Wednesday – now I’m watching the news about the bombing AND the news about the trial, my mom is here AND my Aunt got into town…BON JOVI here we come!!!!  We got home from the concert to news coverage about the Fertilizer Plant explosion in Texas.
Thursday- trip to Gardner Village with the kids and family and the news starts coming in about MIT and Watertown – we’re all glued to the television – The 2 older kids and I along with the youth in our ward got to host the Special Needs Mutual activity.  It was wonderful and a great uplifting thing in the middle of all the insanity going on in the world.  Mom and I finally go to sleep sometime around 3:30am.
Friday – News is playing 24/7 while I am trying to get everything ready for the 7 year old’s friend birthday party.  He handed out just over 30 invitations and we had 27 kids show up.  He was in heaven.  After the party we had a big family dinner before my Aunt had to head back home and of course we sent the kids to play while we watched everything go down with the bombing suspect.
Saturday – 8am soccer games followed immediately by a bridal shower for my soon-to-be sister in law followed immediately by dinner with all the Housewives, their husbands and my Mom for Gena’s birthday!!!
ALL of this was going on along with the normal every day household things that needed to be done.  The week went by in a blur, I enjoyed the concert, the activity, and getting to spend time with family.  I was especially thankful for the capture of the bomber in Boston and the uplifting stories that have come out about that day.
I do have something to share with you today though.  I will fully admit the days got away from me with everything going on so the party wasn’t exactly how I had planned but it turned out cute and the kids all had a great time.  I was surprised at the lack of skylander things I was able to find locally.  I didn’t make it to the party store so there may have been a bunch there but luckily I found McKenzie at KidInvitations and she hooked me up with a cute banner which included cupcake toppers.
While there wasn’t an extreme amount of decoration it all pulled together awesomely. 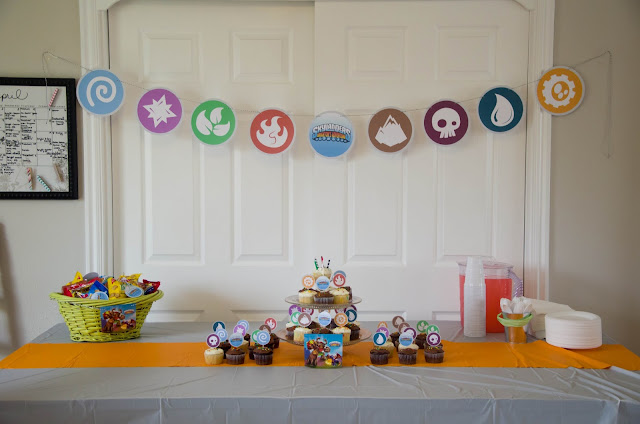 Here’s a picture of the *party* area.  The Skylander banner I was able to print out at home.  I printed it out on white stock and then my Mom and I cut them all out.  I used a large needle and some grey/white baker’s twine to string it all together.  The banner came with the images for the cupcake toppers on the same pages so there wasn’t a big waste of paper which was an added bonus. 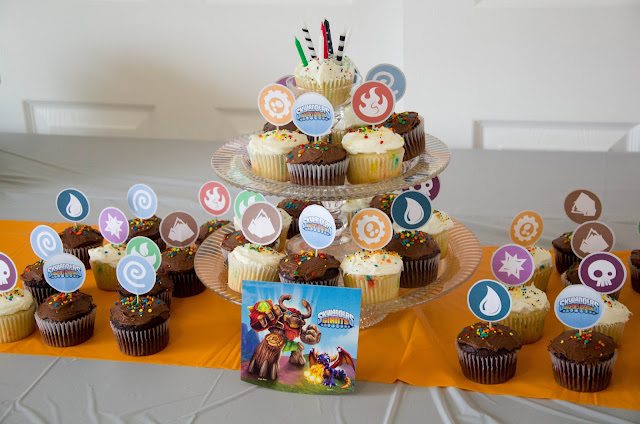 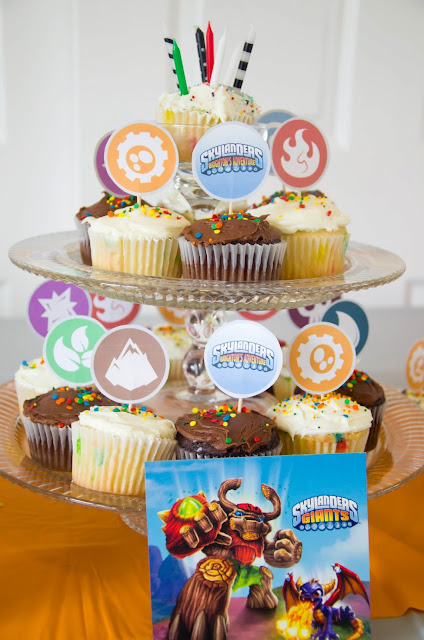 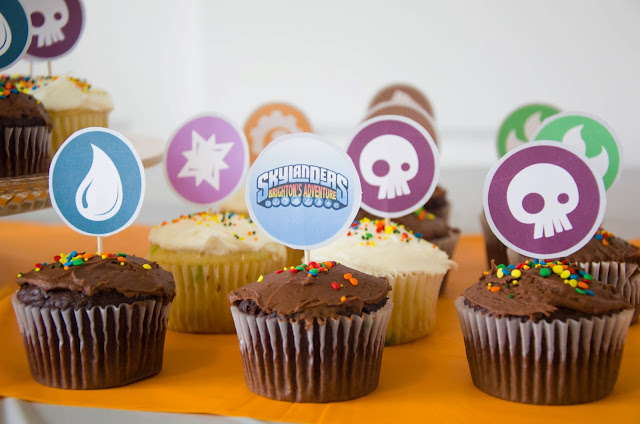 We cut out all the cupcake toppers (of course I couldn’t find the circle punch which would have made it SO much easier) and then taped them to toothpicks and stuck them in the cupcakes.
Once we had that done I used the personalized image and my good friend iPiccy to create thank you tags for his friends. 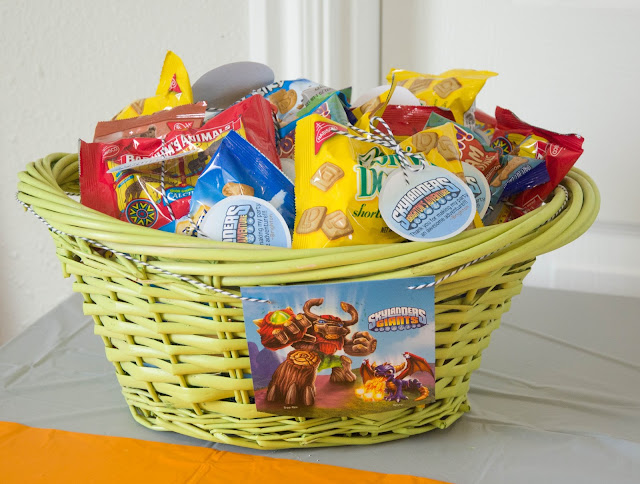 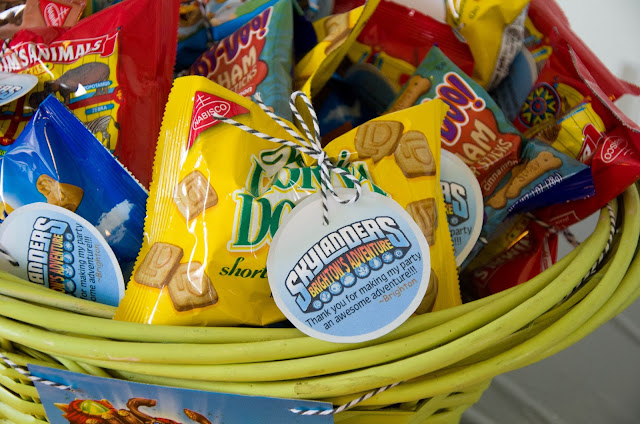 Thankfully Paula had an adorable green basket that the treats fit into perfectly.  I used the needle and baker’s twine to attach the tags to the little cookies and treats we used as his thank you.  The Skylanders Giants picture I hung to the front of the basket I got from the kid’s happy meal box.  It worked well as an extra decoration.
In my YEARS of party experience I’ve decided 90 minutes is the perfect party length, I’ve also found that the more kids you invite the less you have to do to entertain them.  We held the party from 3-4:30.  While everyone was arriving THANKFULLY we had great weather so the kids all played outside.  The girls were excited to help with games so they had them playing Simon Says, Red Rover Red Rover and a few other games.  While they were doing that we prepped the living room for gift giving time. 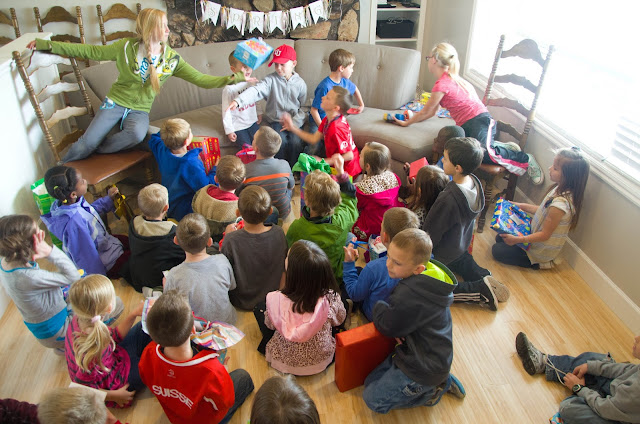 Back at his 1st friend party I started the tradition of letting the kids each hold their gifts and he will call them up to open their presents and when they walk up there I get a picture of each of them with him.  They’re a favorite to look back on, here are a couple of the super cute pictures. 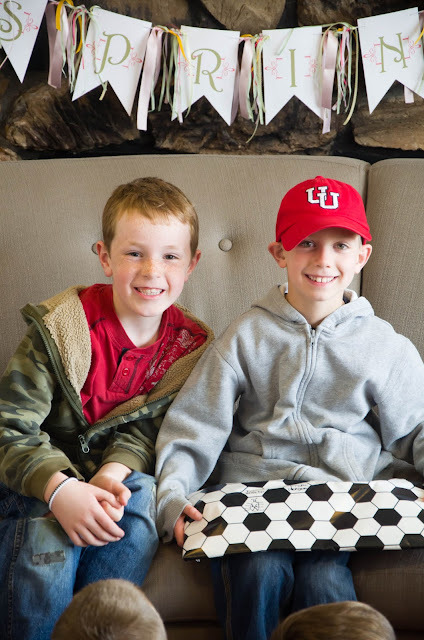 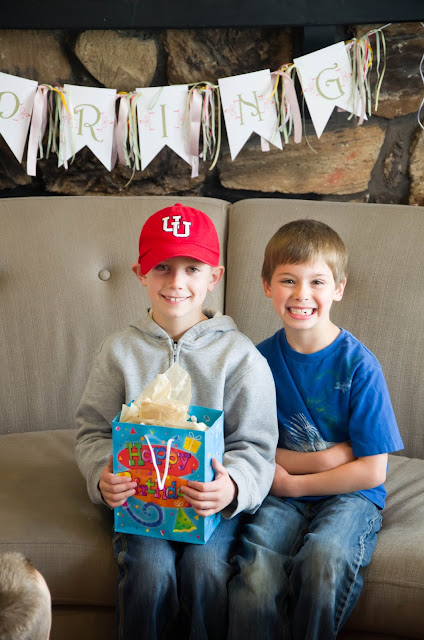 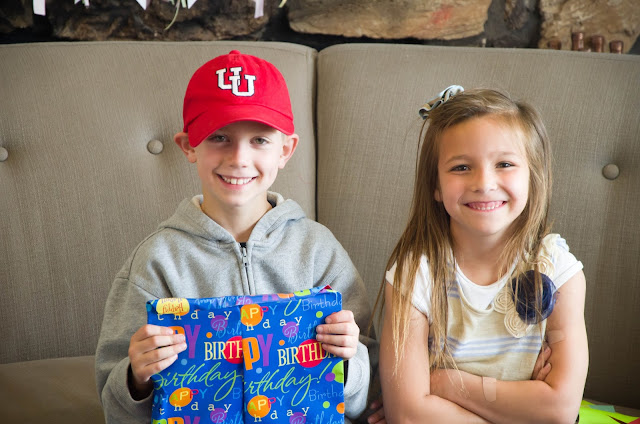 And then of course there is the mandatory group picture: 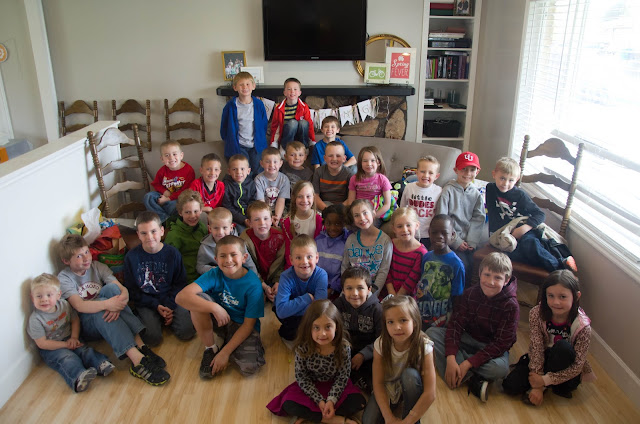 Aren’t they a cute bunch?!
After presents there was just enough time left to sing a very energetic version of Happy Birthday (I thought my Aunt was videoing it but she was taking pictures) cupcakes and ice cream. 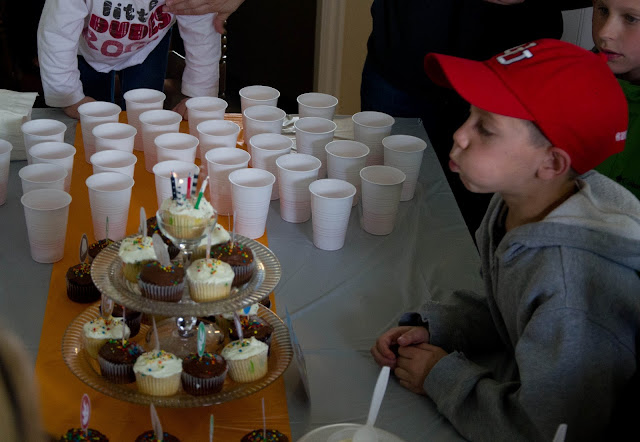 He looks like he’s making a very specific wish I think.
Everyone enjoyed their cupcakes and ice cream and then as they were leaving Mr. Man handed out the goodies and clean up was kept thankfully to a minimum.
With the way the week went I was so lucky to have all the extra hands to help pull it together.  HE was beyond thrilled, it’s not often you get to have 3 birthday parties in 1 year and he sure loves his Skylanders!
© The REAL Housewives of Riverton, 2011-2012. Unauthorized use and/or duplication of this material without express and written permission from this blog’s authors and/or owners is strictly prohibited. Excerpts and links may be used, provided that full and clear credit is given to The REAL Housewives of Riverton with appropriate and specific direction to the original content.
« Spring Mantel – free printables
The Color Run – August 24, 2013 – COME JOIN US! »